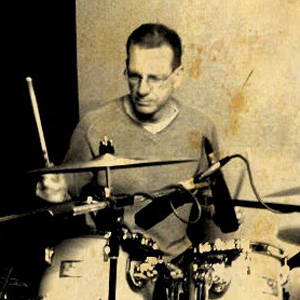 Phil started banging and shaking things at an early age, much to his mother’s annoyance. However, this didn’t reach its obvious conclusion – drumming – until he was 28.
In the meantime, his musical education took a detour via the clarinet,choral singing (Monteverdi – nice!) and amateur dramatics. Having failed O level music (shameful!), Phil concentrated on the sciences. Maths A level revision was accompanied by Genesis, Pink Floyd, Camel and Led Zeppelin, courtesy of Radio Caroline (great!).
Four years at Surrey University resulted in BSc in mechanical engineering and lead to 15 happy years breaking artificial hips and bus axles as a Research and Design Engineer (smashing!).
Having finally bought a drum kit, Phil set about teaching himself and quickly developed by playing each week at St George¹s church. Later he learned to play the djembe at Knock on Wood and began gigging with Carabali who play West African polyrhythms.
Phil would like to think he brings influences from Sting, U2, Iona and Pat Metheney (mellow!). As well as having attached his name to the Strawberry Thieves for over a decade now he also plays with Leeds based covers band, Smokestack (rocking!).